India accounts for seven of the world's 10 cities with the worst air pollution, according to a new report, but previously smogbound Chinese cities have seen a marked improvement. air pollution.

Gurugram (previously known as Gurgaon), a suburb of the Indian capital New Delhi, is the world's most polluted city, according to Greenpeace and AirVisual, which found it had an average air quality index of 135.8 in 2018 -- almost three times the level which the US Environmental Protection Agency (EPA) regards as healthy.

The Greenpeace and AirVisual analysis of air pollution readings from 3,000 cities around the world found that 64% exceed the World Health Organization's annual exposure guideline for PM2.5 fine particulate matter - tiny airborne particles, about a 40th of the width of a human hair, that are linked with a wide range of health problems.

PM2.5 includes pollutants such as sulfate, nitrates and black carbon, which can sneak deep into the lungs and cardiovascular system. Exposure to such particles has been linked to lung and heart disorders, and can impair cognitive and immune functions.

Every single city included in the report in the Middle East and Africa exceeded WHO guidelines for PM2.5, as did 99% of cities in South Asia, 95% in Southeast Asia, and 89% in East Asia.

"As many areas lack up-to-date public air quality information and are for this reason not represented in this report, the total number of cities exceeding the WHO PM2.5 threshold is expected to be far higher," the report warned.

In two months of last year, the AQI (Air Quality Index) in Gurugram -- as measured by levels of fine particulate matter known as PM2.5 -- was above 200. The EPA regards this as "very unhealthy" and warns that "everyone may experience more serious health effects" if exposed.

The WHO estimates that 7 million people a year die prematurely from exposure to air pollution globally, with the World Bank calculating the cost to the world economy in lost labour as $225bn.

The problem is particularly pronounced in South Asia. Eighteen of the world's top 20 most polluted cities are in India, Pakistan or Bangladesh, including the major population centres of Lahore, Delhi and Dhaka, which placed 10th, 11th and 17th respectively.

One bright spot was China, once the world's poster child for urban air pollution. The report found that average concentrations of pollutants fell in Chinese cities by 12% from 2017 to 2018, while the capital Beijing has fallen out of the top 100 most polluted cities following concerted efforts to get air pollution under control.

China's most polluted city in 2018, according to the Greenpeace/AirVisual report, was Hotan in the far west. Baoding, which once ranked among the worst in the country, is now at number 33. In 2015, residents said they often couldn't see neighbouring buildings because the air was so smoggy.

While China saw improvement, however, many neighbouring countries suffered major increases in pollution, including in Indonesia, South Korea, Vietnam and Thailand.

In January, authorities in Bangkok deployed planes with special rainmaking capabilities -- a technique known as cloud seeding -- to relieve persistent pollution in the Thai capital. In the same month, cities across South Korea, China and India reported major spikes in air pollution, as winter fuel burning contributed to the smog blanketing the region. 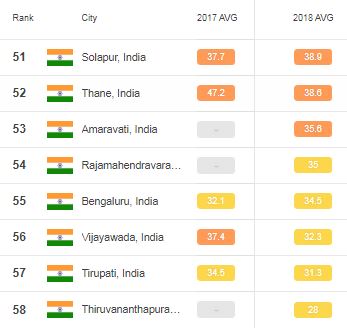 What is the cause for the rise in Air Pollution?

Climate change is making the effects of air pollution worse by changing atmospheric conditions and amplifying forest fires, the report said, while noting that the key driver of global warming, burning fossil fuels, is also a major cause of dirty air.

"What is clear is that the common culprit across the globe is the burning of fossil fuels -- coal, oil and gas -- worsened by the cutting down of our forests," Sano said.

What can be done to decrease the Air Pollution levels in the cities?

We need to decrease our dependency on Fossil Fuels, which will go a long way in combating Global Warming. Our leaders need to take the health of the population more seriously and help in the transition from fossil fuels to renewable energy. They should invest heavily into the greener renewable sources of energy like Solar, Wind etc.

Global Warming is on accelerated path and needs to be arrested by adopting greener methods in our everyday life.

Seeing the way China was able to tackle this epidemic by instituting strict corrective measures, whereby Beijing has fallen out of the top 100 category; should give India hope too. If these corrective measures are implemented soon, India can also reduce it's urban air pollution index.

Styrene Gas leaks from LG Polymers plant is reported to have affected hundreds of people within 3 km range from the plant location. Leak happened at 3am under darkness when plant was being restarted a

Cape Town to run out of water in 90 days.